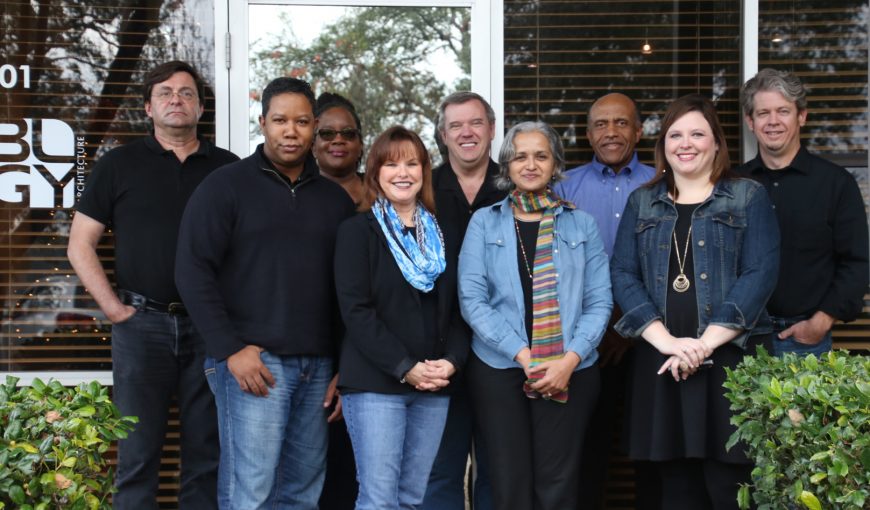 At BLGY, we have much to celebrate this holiday season. We are thankful for our loyal clients, for our dedicated employees, for our friends and partners in the community, and for the interesting work that keeps us coming back to the office each day. But this year we have something extra special to celebrate – this year, we toast to 60 years of practice. In honor of this anniversary we decided to take a look back at the past six decades, to reflect upon the important milestones, and to appreciate the hard work, talent, and good fortune that got us to where we are today.

BLGY was founded as Barnes Landes Goodman Architects in 1955. Founding partners Jay Barnes, Jr., Robert (Bob) P. Landes, and Jackson (Jack) C. Goodman each brought a unique set of skills to the firm. These three individuals represented a true multi-disciplinary A/E firm long before such combinations were common in the industry. Jay was an architect and structural engineer, Bob an architect, and Jack a civil engineer. In 1958, architect Lamar Youngblood joined the firm and it became known as Barnes Landes Goodman & Youngblood Architects. These partners were united not only by their practice, but also as lifelong friends. They dearly loved Longhorn Football and rarely missed an opportunity to tailgate together at home games, or to make road trips in support of the team.

The firm grew steadily and took on diverse projects – from educational and commercial office buildings to military and criminal justice facilities. In 1984, the firm was hired to design the iconic Bowie High School for Austin ISD. At 300,000 sq.ft., it was the largest high school in Texas at that time.

In 1987, Bob and Jack invited Benny L. Hawkins to join the firm as Executive Vice-President of Development. Two years later, Benny acquired majority ownership of the firm which he still holds today. By this time the firm had converted its form of ownership from a partnership to a Type S corporation. The shortened name of BLGY Architects was adopted, and is today referred to as BLGY Architecture.

Benny’s first years at BLGY occurred in a recession that heightened his learning curve and business resolve. With a couple of prior decades in the public sector that culminated at Austin ISD, he had a strong record of leadership and management. However, the world of private practice presented new challenges, such as marketing the firm and embracing the opportunity to implement new ideas and innovations. But the blend of seasoned practice veterans, more youthful energy, and proven employees mixed together to generate a stronger team that propelled the firm to new heights.

By 1997, the firm had vigorously emerged from the recession and grown to an impressive 56 full-time employees. The firm continued to build a strong portfolio of educational projects and accomplished several notable milestones along the way, such as design of the first LEED Silver school for Austin ISD.   Numerous community service recognitions also arrived in acknowledgement of support provided to education foundations and other good causes.

Throughout the past 60 years, BLGY has remained grounded with an emphasis on hard work, integrity, inclusiveness, and community service. These values have carried us through the tough times and have made the good times even more meaningful. So as 2015 draws to a close, we say cheers to the next 60 years!