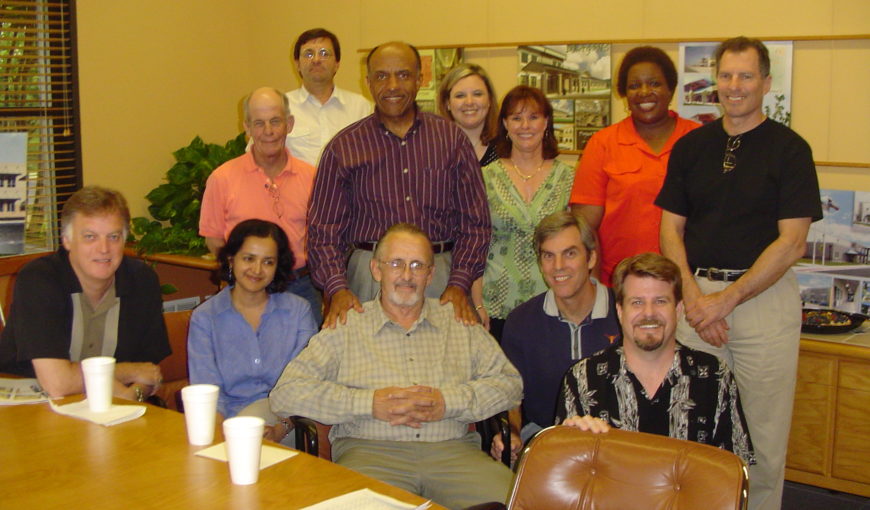 I am a Black male architect born in Austin, Texas, and hold painful awareness of racial healing desperately needed in our country.  I find myself wondering what corrective action must occur in addition to legislation and prayers.  News reports reveal, … “Blacks in Texas during the past decade have been killed by police at a rate eight times higher than Whites”, …”White households have net worth 10 times greater than Black households and almost 20 times greater during recessionary times”,…etc.   I give thanks to my heavenly Father for my household not being included within these beyond-pitiful statistics.

However, there also are thanks due to some earthly beings for having provided career assistance – and care – that enhanced the quality of my life, many of whom were White.  Within the racial protest climate currently prevailing, I cannot forget – and nor will I ever forget – that at pivotal times in my life I have been significantly befriended by Whites.

I am not saying that I have been spared from racial discrimination directed toward Blacks born particularly in Southern United States three quarters of a century ago like myself.  I have on teeth-grinding occasions experienced a variety of such. What matters to me now is the healing of our nation’s toxic racial relations, which I believe is never going to occur if silence only is directed to positive racial assimilation, and guaranteed wailing is directed toward negative progress.  Thus, I have chosen to reveal a few positive reports of interracial assimilation experienced in my life promoted by Whites.

As a pre-teen in the late 1950’s I helped my dad build our family’s four-bedroom home in segregated east Austin, Texas after he completed pencil drawings on re-cycled brown paper grocery shopping bags.   That sparked my interest in architecture, though the architectural field everywhere was almost totally dominated by Whites and nearly everything in Austin was segregated including the University of Texas and my high school.  By the time I graduated from high school in 1961, I had received a terrific confidence boost by winning a citywide sales presentation contest among the prevailing five high schools in Austin held at a prestigious downtown site.  My two proud coaches had tirelessly tutored me after school hours and caused one to sob loudly with joy and the other to successfully beg for permission to chauffeur me home though my parents had transported me.

That victory decisively boosted my feeling of equality after having entered the contest praying to at least win Third Place rather than return to campus as the empty-handed president of my 250-member senior class and get laughed at. A gifted classmate of mine had won First Place the year prior and I was sporadically informed by naysayers that my victory was going to be unlikely because of non-likelihood that the all-White male judges panel would allow Blacks to win two years in a row.  Several days after winning I was still hating myself for lacking confidence and vowed to never again hold such compromised self-esteem.  I felt like an equal human being and committed myself to play-to-win future quests if I decided to pursue them, or not play – period!

Blacks a few years earlier had begun to enroll in the University of Texas at Austin.  I had taken every available high school preparatory course meaningfully related to architecture and had been allowed to visit off campus a rare Black-owned lumber yard and contractor during school hours to further learn.   I felt armed for college, racism, or no racism.

Enrolling in Fall, 1961, things went up and down at times and I decided to take a two-year hiatus after four years and pursue full-time workplace opportunities which increased my maturity and resolve to graduate.  Returning to campus and attaining my Bachelor of Arts Architecture degree in 1969 well-positioned me for career opportunities though racial discrimination still prevailed to a nagging extent despite passage of the 1964 Civil Rights Act.  Nonetheless, I launched a career wherein each employment opportunity received to date after receipt of architectural degree has been presented to me without necessity for me to ask –  i.e., one-half century of no job hunting.

In the midst of continued racial discrimination despite the 1964 Civil Rights Act, various Whites in the architectural, engineering, and planning industry defied stubborn racist employment trends and heroically opened doors for me.  They became mentors, co-workers, and valued friends.  Following are examples of some of my rewarding racial assimilation experiences with them that refute contention that all Whites share the same disparaging view that Blacks are being’s unequal to Whites and therefore should not be provided equal opportunity.

Though in 1973 I had not taken the Texas architectural exam, I was askedby a White architect employed by the City of Austin to assist him in dealing with rapidly mushrooming city growth that required more fire stations, recreation centers, and so forth.  I promptly accomplished the exam and enjoyed rapid professional development under his grooming while growing into eventual supervision of a score of City staff architects and engineers during our 10 years of delivering municipal facilities. Professional respect and personal friendship prevailed and overnight stays between our households were exchanged after his retirement though he moved 500 miles away.  I flew 500 miles to his funeral on a windy 10-degree winter day wherein interaction with family and friends portrayed feelings of everyone simply being human beings who cared about each other; i.e., colorblind friends for life.

Growing at the rate of approximately 2,500 students annually in 1983, the Austin Independent School District contacted me to verify if I would be interested in directing its bond construction program while also heading its Construction Management Department.  Responsibility would be held for more than 750 staff which included architects, engineers, maintenance crews, safety director, real estate director, and everyone else who had key connectivity to facilities including district police.  I joined the District and received high support from licensed architectural and engineering staff that enabled record-breaking delivery of new campuses.  Hardworking mostly White craftsmen enabled me to look like a facilities management Houdini who could keep classrooms open though formidable deterrents persistently arose such as asbestos abatement, fires, floods, vandalism, etc.

Despite being aware of the approaching 1988 recession and having a son in college and another imminently headed that way, I developed entrepreneurial itch like others in my ancestry and somewhat nervously submitted my resignation.  I was given an emotionally moving Board Room goodbye, lake picnic, best wishes cassette tape, and sore ribs from hugs that briefly made me wonder if I had made a bad decision to resign and trust the shaky economy.  Clearly, I had again obtained colorblind friends for life.  However, concern toward livelihood faded quickly when I reminded myself that God had been at my side during successful public employment and that I should maintain faith toward enjoying livelihood in the private sector.

Career offers from four architectural firms arrived before my departure.  One of them was BLGY ARCHITECTURE which was then 33 years old and known as Barnes, Landes Goodman & Youngblood, the surnames of its White male founders.  I was invited to come aboard as Executive Vice-President with potential to become majority shareholder and CEO within a few years.  Those rewards were attained in two years, and December 2020 will establish 32 years for my BLGY tenure.  Decades of long-term friendships similarly occurred with diverse BLGY staff as well as co-owners.  The family of a White male employee who passed years after retiring from BLGY requested that I be a pall bearer.  I was requested by his family to repeat that role two years later when his widow passed.  Again, colorblind friends for life.

My BLGY predecessors “gave back” to community and I felt motivated to do likewise. Recognition for support to minority businesses includes an “Outstanding Texan Award” presented to me by the Texas Legislative Black Caucus. Additional recognitions for same cause include “Executive Director’s Award”, and “Advocate of the Year Award” from advocacy organizationsto BLGY and me.   The exclusive Texas State Board of Education’s statewide 2018 Gold Award to BLGY has been followed by my receipt of the American Institute of Architects Austin Chapter’s John V. Nyfeler, FAIA, Community Service Award whose bestowment  substantiates exceptional volunteerism and other contributions to quality of life within Austin’s vibrant society.

It is hoped that all who read this blog will understand that God breathed life into all of our red blood-filled bodies, but maintenance of our souls cannot be delegated to other beings, or cinched by wealth, religion, occupation, gender, etc.  I am convinced that each of us must self-task to keep our souls – and our race relations – in order, and doing so with humility, understanding, forgiveness, and love toward persons of allskin colors will enable colorblind friends for life!